Ever since I started to work on OMR compiler codegen for RISC-V, I struggled to setup Eclipse CDT so I canuse use it for OMR development. I tried a lot of things, but there was always something missing. The most annoying part was that code indexer did not work very well and that made code assist (code completion) useless.

Quite recently, I did another pass over the setup and found a way that works okay (so far):

This post contains a step-by-step recipe how to setup Eclipse CDT.

Following recipe has been tested on Eclipse CDT 2020-06 withCmake4eclipse plugin. The easiest way to install the plugin is to from eclipse marketplace right from the IDE.

If you already have some Eclipse project setup files for OMR in your Eclipse workspace (.project, .cproject and .settings), make sure you remove them before trying the following. Otherwise, it may not work because Eclipse will pick parts from old config and you get into all sorts of weird situations. Been there, seen that.

Eclipse is a widely used and very flexible IDE to make coding more efficient. Of course, it can be used for developing Navit:

We will combine the usual CMake environment, which is used to configure the Navit build process and

Android developers: ADT used to be the standard tool for Android development on Eclipse. Since Google has moved to Android Studio, ADT is no loner maintained. Andmore is an Eclipse project based on ADT code. It is a near drop-in replacement for ADT (though ADT projects need to be converted once to work with Andmore, see the FAQ at https://github.com/eclipse/andmore/wiki/FAQ.)

Setting up Eclipse requires cmake4eclipse, which is available from Eclipse Marketplace. (Previous versions relied on CMake to generate a project that could then be imported in Eclipse, but this is now deprecated for reasons listed below.) Build artifacts get placed in a separate folder in the source tree, which helps us keep the source tree clean in a similar way as cmake does, making version control a whole lot easier.

We assume that the source code for all your projects resides in ~/src and that you use ~/workspaces as the base directory for your Eclipse workspaces. Navit source code then goes in ~/src/navit and the project dir inside your workspace will be called navit-linux. This is not a must – you can use different path names, but remember to adapt the paths below.

If you have #33f553c in your branch history (i.e. if you forked from trunk or merged trunk after May 23, 2018), this is already in place and you don’t have to do this yourself any more.

That's it! You can now build, run and debug Navit right from Eclipse.

If you want to try out different command line options (e.g. run Navit with a different config file), you can do so by going to Run > Run Configurations... and creating a new run configuration.

If you followed our old instructions and used CMake to generate a project configuration to import in Eclipse, it is strongly recommended that you upgrade:

If you set up your Eclipse project with a CMake-generated configuration and want to switch to cmake4eclipse, follow the steps below. Don’t panic—your run/debug configurations remain in place, you just need to adapt paths in two places (and we’ll explain how).

Android development is a bit more challenging than Linux development because we'll be dealing with two independent (but nested) source trees – the C code and the Android-specific Java code. You can see and edit the Java files with the above setup, but you'll get a lot of annoying error messages, and most of Eclipse's code analysis features won't work for the Java code.

This can be solved by importing the Java code as a separate project (which can go in the same workspace). Unfortunately we can't just import the whole thing as an Android project because Eclipse expects an AndroidManifest.xml file – which we can't provide because Navit's toolchain generates that file during build. But there's a workaround.

In order to complete all the steps, you need to build Navit once from the command line as described in Android development#With cmake. (For convenience, you can create the respective build directory in your workspace dir.) If you don't, you won't be able to complete all of the steps. You can skip them for the moment and do them once you have built Navit. Eclipse will still be able to make sense of the code, but you will have files in your workspace (such as AndroidManifest.xml) which have nothing to do with Navit.

Here's how to do it:

And you have the Android code in a separate project, with the usual syntax features available here. 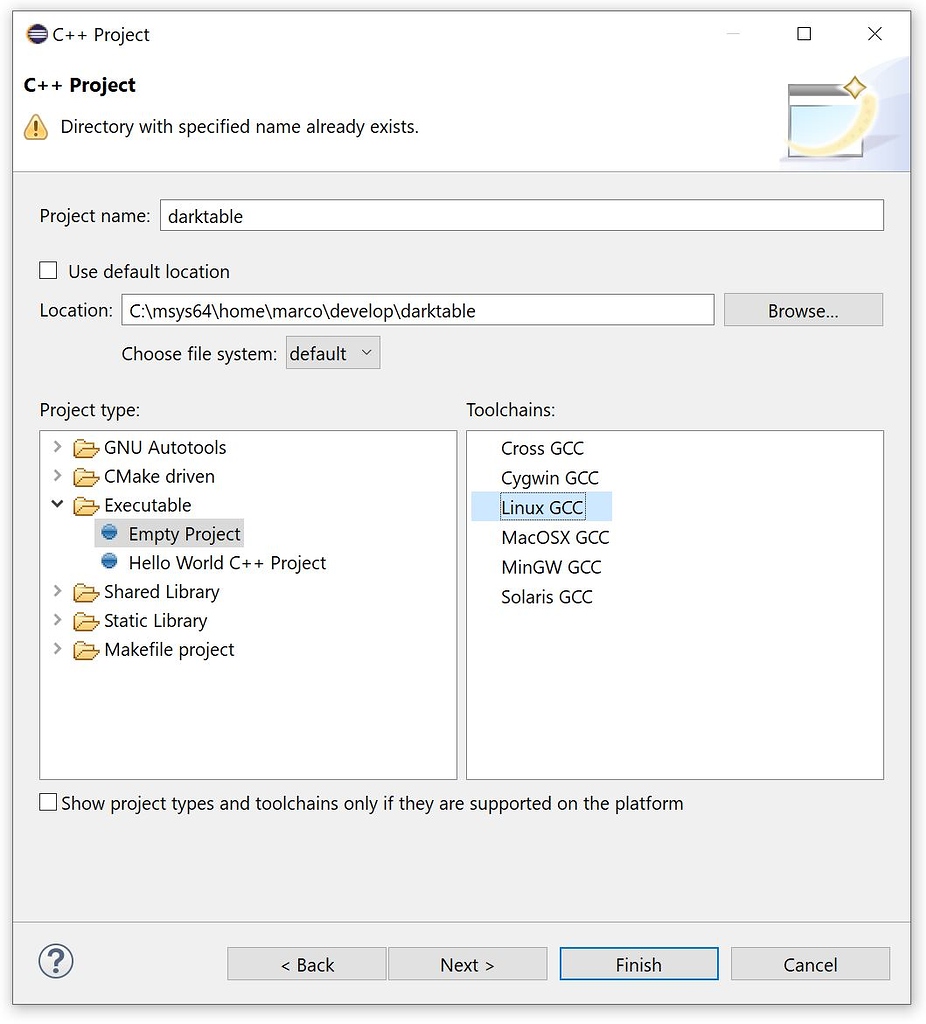 If anyone wants to have a go: Figure out how to build an .apk from Eclipse. Prerequisites will likely include: 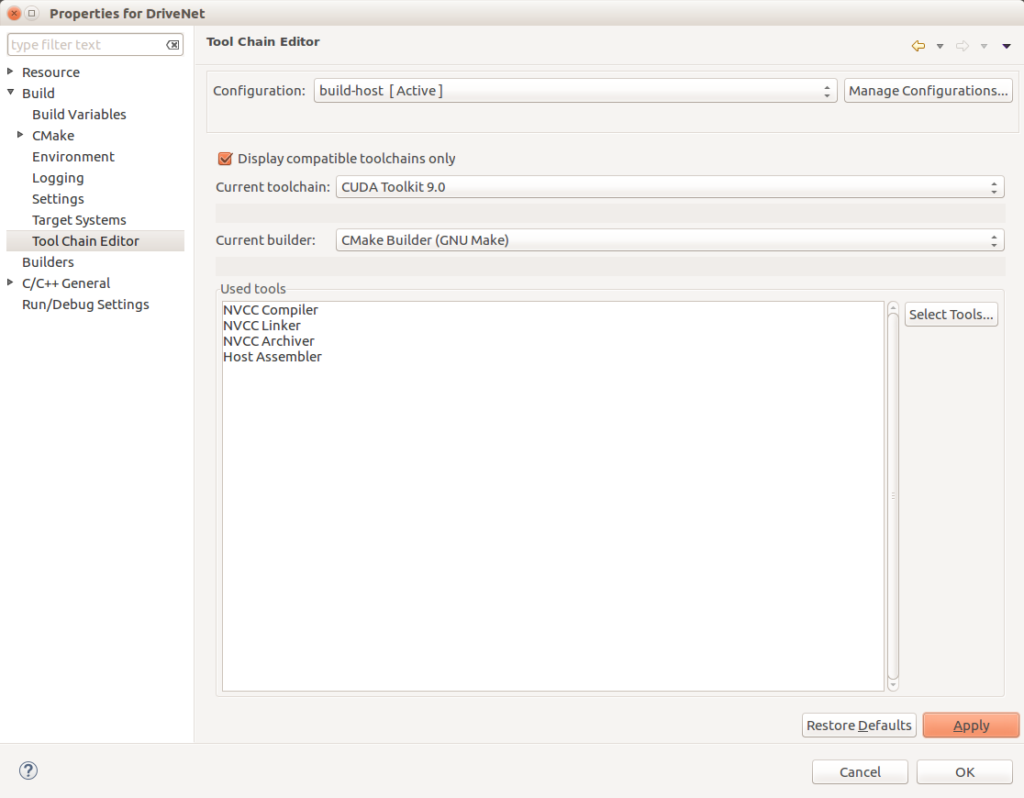 Valgrind is a powerful debugging and profiling tool. It is available as a command-line tool, but the Eclipse plugin makes it a lot more convenient to handle (among others, no commands to remember and the ability to jump directly to the line of code that got flagged). By examining a program’s actions as they are executed, it can detect errors that are otherwise hard to track down. Its Memcheck component can notably detect:

All of these can be spotted fairly quickly with Valgrind, possibly saving you several hours of debugging (as the author of these lines will happily confirm). If you’re getting any kind of spurious behavior, it’s a good idea to run things through Valgrind and see if it’s caused by any of the errors listed above.

To start Navit and profile it with Valgrind, use the Profile command. It is located next to its Debug and Run siblings in the toolbar:

Usage is straightforward and mostly similar to Run and Debug. However, Memcheck will not present a result until the program has terminated (either regularly or by being killed).

The most important setting is the profiling tool to run, right at the top of the tab. Memcheck is selected here. You can leave the other options as they are (unless you know what you are doing—but then you probably won’t need those instructions).

Valgrind will only spot errors if the faulty code actually gets executed. Therefore, before you request a merge of your new code, run a few test cases while profiling them with Valgrind. If you are trying to hunt down a particular error, try to reproduce it with Navit running in Valgrind.

Be aware that behavior (including if and how certain bugs manifest themselves) can be slightly different with Valgrind: Timing is different, as the code will appear to run on a processor that is some 20 times slower than your actual CPU, therefore race conditions may play out differently. Memory is arranged differently, as Memcheck “pads” each allocated block with some buffer bytes on each end to detect out-of-boundary accesses, thus some invalid memory operations will behave differently.

If you are experiencing a bug that seems to disappear as soon as Valgrind is involved:

If Navit stops responding but is maxing out one CPU core, but you can’t figure out where you ran into an endless loop, here’s how to find out:

Make sure you have started Navit using the Debug functionality in Eclipse. When Navit stops responding, run the following from a shell:

This will halt the Navit process, give you a stack of the current call trace and allow you to inspect variables—basically the same you can do when Navit terminates abnormally during debug. Except here you can just hit Continue and repeat the exercise as often as you like. Examine the call stack (if needed, also comparing different debug sessions) and you will get an idea of where it is hanging.

The previous instructions were based on a different infrastructure (notably SVN) and took a slightly different approach. If you'd like to tinker, here they are:

This guide assumes you already have the source downloaded locally, and have already built a package for Android using CMake (see Linux development).

And then the project should be clean of errors besides the only one stating that android_layout_default.xml is not well-formed. That's sad true. That file is indeed not an xml document but a fragment of one. Do we have some setting to switch this check off? Should we rename that file?