Conical refraction was produced by a transparent biaxial crystal of KGd(WO4)2 illuminated by a laser beam. The ring patterns at different distances from the crystal were magnified and projected onto a screen, giving rings whose diameter was 265mm. Comparison with theory revealed all predicted geometrical and diffraction features: close to the crystal, there are two bright rings of internal conical refraction, separated by the Poggendorff dark ring; secondary diffraction rings decorate the inner bright ring; as the distance from the crystal increases, the inner bright ring condenses onto an axial spot surrounded by diffraction rings. The scales of these features were measured and agreed well with paraxial theory; this involves a single dimensionless parameter ρ0, defined as the radius of the rings emerging from the crystal divided by the width of the incident beam. The different features emerge clearly in the asymptotic limit ρ0≫1; in these experiments, ρ0=60.

Proceedings of the Royal Society of London Series A
Pub Date:

Recent interest in conical diffraction (CD) has led to a large increase in experimental and theoretical investigations over the last two decades, a marked change from the previous 160 quiet years in the field. Once dismissed as an optical curiosity, the phenomenon has emerged as a fascinating area with potential for a large number of practical applications many of which have been realised while others are still being discovered.

In this thesis a number of aspects of the theory as recently described are experimentally investigated with a view to strengthening the current theoretical understanding of the phenomenon. Developing from single crystal CD (the simplest case), through cascade CD, nonlinear CD, and with a particular emphasis on the polarisation effects of the phenomenon, a number of areas are investigated. Single crystal CD with circularly (CPL), linearly (LPL), azimuthally and radially polarised light (APL and RPL) is examined. The effect of LPL in removing a section of the ring orthogonally polarised to the incident beam is shown, along with the first investigation into the effects of RPL and APL polarisation effects in CD. The effect of the incident beam spot size on the pattern developed is also investigated and shown to conform to the theory. All findings show good agreement with the current theory. Cascade CD with various numbers of crystals and incident beam polarisations is investigated. Included in these experiments are a variable two crystal cascade and the first demonstration of the different patterns produced for a three crystal cascade when left and right circularly polarised light (LCPL and RCPL, respectively) are used, as recently predicted. As with the single crystal case, results are in agreement with theory. In both the single and cascade cases a cross section of the beam is captured to demonstrated the free space evolution of a CD beam. 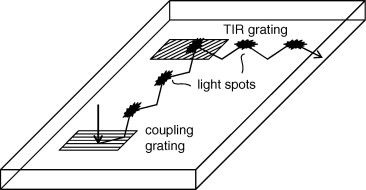 Simultaneous second harmonic generation (SHG) and CD from a single crystal is described in an update of Bloembergen et al.’s pioneering 1970’s investigations with added emphasis on polarisation. SHG in non-phase matched conditions, as well as the influence of incident polarisation on the pattern and type of SHG, are observed. And finally a sensor based on CD demonstrating a simple, practical application of the phenomenon is outlined and a prototype device made and trialled. Using the effect of LPL described earlier to determine the polarisation angle of an incident beam, the device’s use as a polarimeter is also tested to determine the specific rotation introduced by optically active liquids with the initial prototype showing results comparable to current methods.
This work contains 7 chapters. The first is an introduction to the history of the phenomenon along with a thesis statement. Chapter 2 deals with single crystal CD, chapter 3 contains the expansion from single to cascade CD. The complexities introduced by various types of polarisation are described in chapter 4 for both single and cascade setups. Chapter 5 deals with SHG using a CD crystal and chapter 6 outlines the design and operation of the novel sensor based on the phenomenon. The final chapter is a summary of the work and outlook on the future of the field.