Change Log:
1.2.0.0
* Solved an issue where the game would randomly freeze
* Added tip colliders around the manure pits and other areas
*** old save games need to delete 'tipColMap.grle', in save game folder, After starting FS17, and before loading the save game, to recreate a new tip collider map
* Oilseed radish now plants and grows correctly
* Sugar cane now re-grows correctly
* Sugarcane can now be grown when using Seasons mod. (Can be planted anytime, it will germinate in early spring. It takes one and a half years to mature fully. Can be harvested in autumn of the year after germintation. It will wither if not harvested before the second winter and will have to be re-planted. Will re-grow starting again in spring)
* Added some small silage bunkers at Roberts Farm for your use
* Added a sell point for silage at the pig farm
* Removed bushes and mud in forest areas
* Added a fertilizer production building (low output) near field 39 and the barn
* Added sell points for fertilizer, seed and fuel
* Raised terrain below shop asphalt area
* Raised terrain below cow manure bunker
* Added final detail elements
* Traffic makes turns slightly faster
* Added a hedge removal instruction poster in main farm maintenance area
* Added some hotspots on the map for placeable, storage and forest areas
* Added chicken coop, eggs can be found inside in nesting area
* Increased storage capacity of feed mixers
* Added displays for inputs on seed/fertilizer/diesel storage at main and cow farms
* Increase milk price at bakery slightly
* and much more...
Welcome to The Pacific Northwest. This is a fictitious map loosely based around the Lewiston, ID and eastern Washington area where the Snake and Clearwater rivers meet. At the rivers there is a plateau that is high above, accessed by a winding mountain road. The fields on the plateau are more the style of a UK map with small odd shaped fields, hedgerows and narrow lanes, where the valley fields are more of the US type, large and relatively flat and open. The terrain on the plateau ranges from relatively flat to quite hilly.
Start with a small farm and gradually grow your farm by buying smaller fields and merging them into larger ones.
This map includes the following:
- 2 main farms, one near the sheep and pigs. The other near the cows.
- 44 fields including 8 grass fields.
- Optimized for Seasons (highly recommended! Weather, crop growth, etc.)
- 5 additional fruit types, plus milk. Requires Kotte Uneiversal. Recommend Stop Milk Sales.
- Removable hedgerows
- 14 sell points
- Two large place-able areas
- Includes animated gates, doors, lights and more.
- and lots more.
Enjoy!
1.1.1.0
* Performance optimization
* Moved gold nugget located inside the western bridge
* Removed foliage in field 32
* Changed auto doors to manual doors at Snake River Oil Mill
* Added grazing mod for sheep and cows
* Added Water Trough Addon
* Added more trees to two forestry areas
* Dirt areas for cows and pigs adjusted slightly
* The county now snow plows the main roads
1.1.0.0
This version fixes a couple of issues that prevented multiplayer games from working. Save games are compatible with one exception. This is that all trees and hedges that have been cut will be reset. If playing with an existing save game please remove 'splitShapes.gmss' from the save game folder before starting.
* Added sugar cane
* Added pellet storage to storage hubs and sales at the barn.
* TMR mixer accepts pellets
* Increased some storage caps
* Fixed barb wire texture.
* Corrected/added some text in the modDesc.xml file
* You now start with newer and a little more equipment
* Fields are less expensive to buy now
* Wood chip economy modified (Seasons)
* Start with a few more sheep
* Tweaked a few objects

The Pacific Northwest Logging edition is the perfect map if you like extremely large and functional fields, and large amounts of big trees for forestry. If you don’t care about forestry, I recommend you play the non-Logging Edition instead.

Original text by epideath:
Welcome to The Pacific Northwest 19. This is a fictitious map loosely based around the Lewiston, Idaho and eastern Washington area where the Snake and Clearwater rivers meet. At the rivers there is a plateau that is high above, accessed by a winding mountain road. The plateau has small to medium sized fields, where the valley fields are much larger and relatively flat and open. The terrain on the plateau can be a little challenging. A little extra horsepower or the use of the train can be very useful. The map is based upon the FS17 version. It is similar in many ways but also quite different.

This map has many great features such as:
– Beautiful town with lively traffic and pedestrians.
– Train that wraps around the northern plateau.
– Great possibilities for all kinds of animals. Specific buildings for horse training.
– Multiple Water and Lime buypoints scattered across the map.
– Some empty buildings spots with Visit option for ease-of-access.
– 10 different sell points for a large variety of products. Including manure, slurry, digestate and wool.

In Logging Edition V1.0, ACME ACRES added a lot of big trees to the map. I have picked up his work and refined it where I can. While also adding back some buildings that were in the original map.

Changes in Logging Edition v2.0 by me, Robbe:
– Overhauled the texturing, grass and bush placement in the newly created forestry lands. Decor depends on tree type.
– Adjusted pricing for many farmlands. Farmlands that were turned into forestry are cheaper now, and other lands have got price refinements depending on ease-of-use and farm-to-land ratio.
– Part of “useless land” is now non-buyable land (farmland 63 neutral ground). Other parts have been given a price because they can be used for grass farming and more.
– Created a new PDA with significantly higher detail and each tree visible, which reflects changes by ACME ACRES and me.
– Re-added certain horse, sawmill and old barn buildings.
– Removed fences around forestry land.
– Removed grass that was added over farming fields.
– Removed farms that wrongly existed on forestry land.
– Straightened out farmlands in the North.
– Changed one farm land to a grass land due to its non-funtional shape.
– Touched up the dirt road around the long fields in the SW.
– Changed a particular asphalt road back to dirt road like it was originally.
– Adjusted nightime: 21:30 – 6:00 (3 hours shorter). 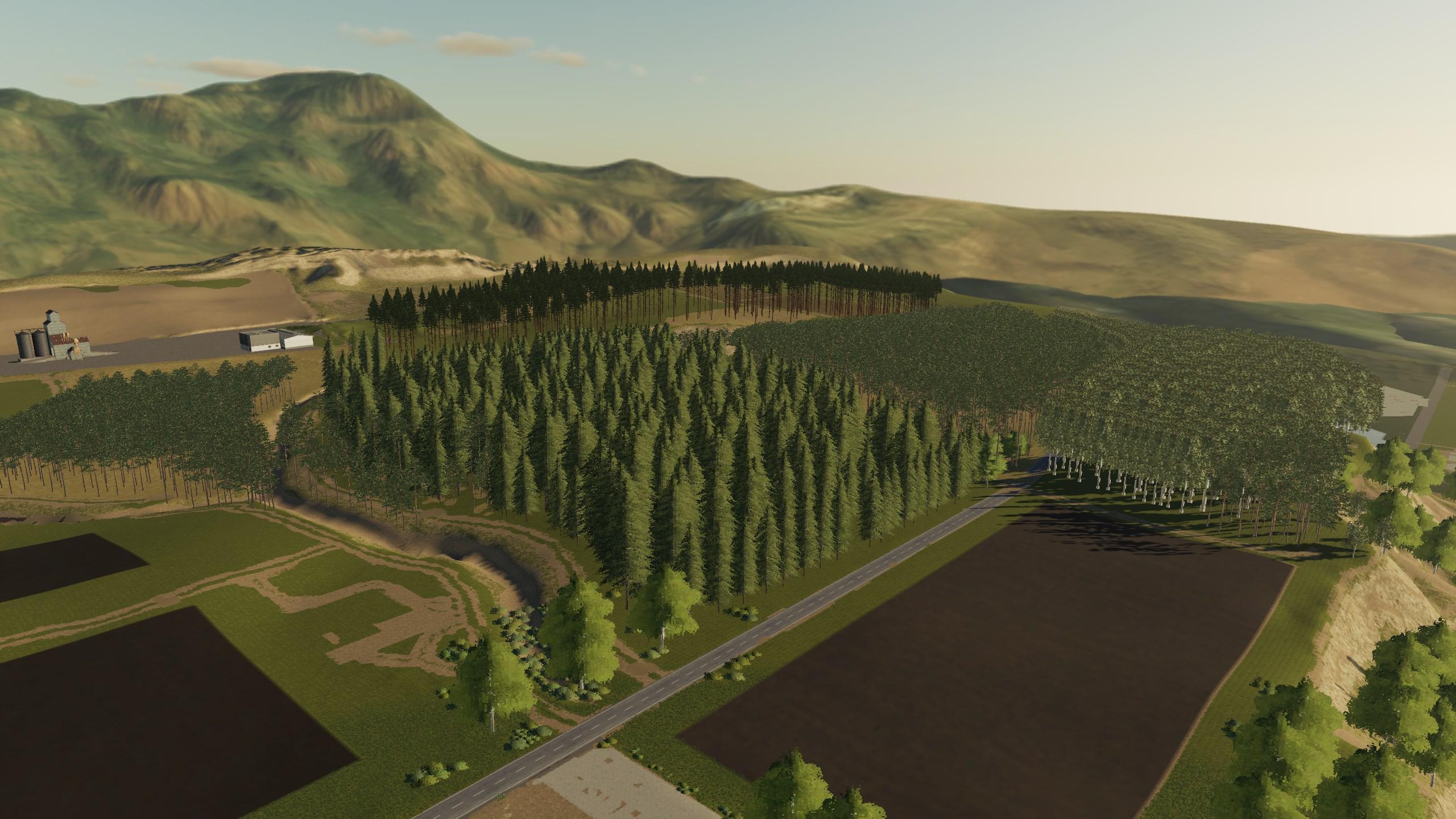 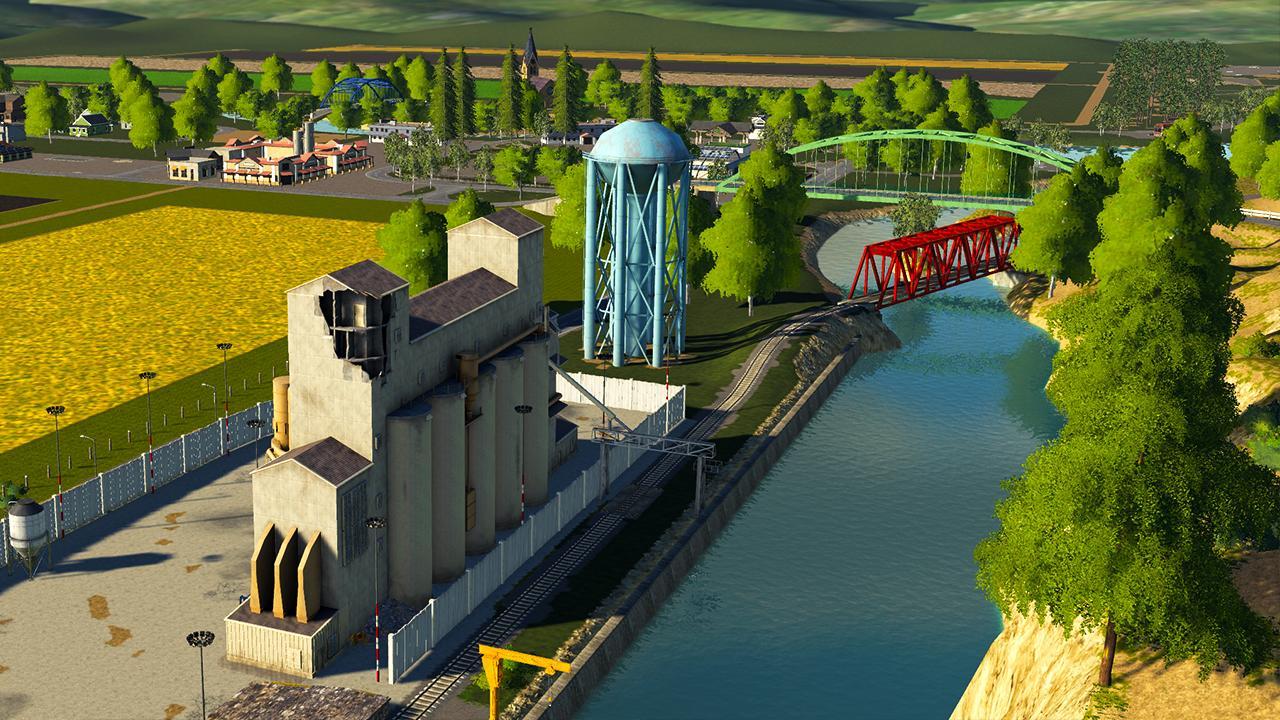 Logging Edition v1.0 by ACME ACRES:
– Added tons of different tree types including BIG trees so you need a chainsaw or a modded harvester to cut them.